The Mirror of Worlds and Balefires Bundle David Drake

The Mirror of Worlds and Balefires Bundle David Drake 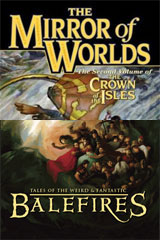 The Mirror of the Worlds is the second in the Crown of the Isles trilogy, which will conclude the epic Lord of the Isles series.

The Fortress of Glass began the tale of how the new kingdom of the Isles is finally brought into being by the group of heroes and heroines who have been central to all the books in the series: Prince Garric, heir to the throne of the Isles, his consort Liane, his sister Sharina, her herculean sweetheart Cashel, and his sister Ilna.

The powers of magic in the Isles have flooded to a thousand-year peak, and even local magicians can perform powerful spells normally beyond their control. Fantastic forces from all angles threaten, trying to keep Garric and his companions apart to thwart the reunification of the Isles.

Now the world itself has suffered a magical upheaval. The ocean has receded and the Isles have become the higher ground of a newly formed continent. But the new continent is a patchwork of geography from the past and future, peopled by creatures from all times and places. Garric and his companions must now struggle for the survival of humanity.

Praise for The Lord of the Isles

"One of the finest epic fantasies of the decade." —Piers Anthony

"Unlike most modern fantasy, David Drake's Lord of the Isles is an epic with the texture of the legends of yore, with rousing action and characters to cheer for." —Terry Goodkind

"True brilliance is as rare as a perfect diamond or a supernova. Lord of the Isles is truly brilliant. We are in at the birth of a classic....There is a lot of fantasy out there, but there is only one Lord of the Isles." —Morgan Llywelyn

Balefires is the long awaited collection of David Drake's weird and fantastic fiction. Before Drake was a best-selling author of military science fiction, he was a prolific writer of horror and fantasy short fiction. Balefires collects some of his earliest professional sales (including his first sale to Arkham House).

In addition Balefires brings together many stories set in the worlds of his fantasy novels (Ranks of Bronze, Lord of the Isles, etc). More than just a collection of stories, Balefires features extensive story notes that chronicles the development of the writing career of one of science fiction's most popular writers, and provides detailed snapshots of the larger-than-life editors, publishers, and writers with whom Drake has worked throughout his career.

David Drake was born on September 24, 1945, in Dubuque, Iowa. In 1967 he graduated from the University of Iowa with a BA in History and Latin. In the same year he was married and entered Duke Law School. Drake was drafted out of law school and served in the army from 1969-1971, spending most of 1970 as an interrogator with the 11th Armored Calvary Regiment, the Blackhorse, in Vietnam and Cambodia. Drake returned from Vietnam and finished law school, after which he spent eight years as Assistant Town Attorney of Chapel Hill, North Carolina. In 1980 he resigned and drove a city bus part-time for a year while doing more writing. He's been a full-time freelance writer since 1981.

Drake sold his first story ( a Lovecraftian pastiche which on rereading isn't as bad as he thought it was) to August Derleth in 1966 while still an undergraduate. He continued to sell stories in law school, the army, and while working as an attorney. His first book was published in 1979 and he has had over 60 books published since then.

Customer Ratings for The Mirror of Worlds and Balefires Bundle